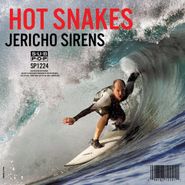 "I Need A Doctor," the opening track on Jericho Sirens, is just what the doctor ordered for anyone who's been missing the San Diego post-hardcore outfit Hot Snakes these last 14 years. As the landscape of loud, aggressive rock has shrunk over last decade and a half into sometimes cliquey, warring factions trying to hold onto some semblance of the old punk and metal guards, it gets harder and harder to come across a record that sounds as fresh as it is loud and heavy. Jericho Sirens delivers the goods with frantic rhythms, soulful, from the gut, searing vocals, and guitar riffs like melodic shrapnel. One can't help but marvel at the precision of their attack, yet the heavy music is never hunkered down by technique or posturing, keeping things sharp and effortless throughout. "Why Don't It Sink In?" is as relentless as a helicopter blade, with shades of some of the less radio friendly Nirvana cuts, while "Six Wave Hold-Down" deserves to be a bona fide hit, sounding somewhere between The Strokes and Motorhead.