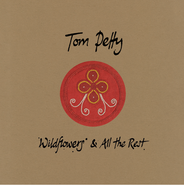 Tom Petty’s 1994 masterpiece, Wildflowers, was Tom’s most acutely confessional album to date. Tom ultimately wrote more songs than he could release at the time, planning the album as a double CD with 25 songs (nearly two hours of music), but his label advised against it and he went with the single disc, 15-song format. Tom had always intended to release the second half of the album as a collection he named All the Rest, featuring ten songs from the Wildflowers recording sessions that were left off the original version and five unreleased tracks. This long-awaited remastered reissue and comprehensive collection, Wildflowers & All the Rest, does justice to his memory and is a must for Tom Petty completests.