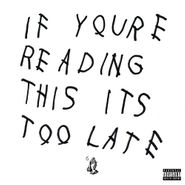 Drake’s fourth album is finally out physically, and it’s yet another piece of near-perfection from the Toronto rapper. Opener “Legend” is another tale of Drake’s meteoric rise along the lines of Nothing Was the Same’s “Started From the Bottom” (“If I die, I’m a legend,” he declares after detailing his successes) over a spare, ghostly beat. But it’s never all about braggadocio with Drake, as paranoid lyrics like “it’s so hard for me to let new people in” seep in. That continues onto single “Energy,” with its refrain “got a lotta enemies” and lines like “I got girls in real life tryin’ to fuck up my day/Fuck goin’ online, that ain’t part of my day.” Drake gets a lot of grief for complaining, but he’s also his own worst enemy and critic, calling himself out for “thinking about money and women 24/7” on “Know Myself” in a way that helps make him more compelling. Those other Drake complaints—that he’s not hard enough, that he’s not the best pure rapper—are routinely silenced by the pure quality of tracks like “Madonna,” a perfect example of how Drake’s unique cadences and lyrical candidness more than make for any perceived weaknesses. If You’re Reading This is referred to as a mixtape, and it’s true that it doesn’t have a crossover track with appeal approaching megahit “Hold On, We’re Going Home.” But Drake doesn’t really need that at this point to make a strong album, and the production across the album is stellar nonetheless, freeing Drake and his collaborators to focus in on what makes him sound great rather than individual tracks. No-nonsense beats by Boi-1da jibe well with PartyNextDoor’s codeine-fueled productions, among others who worked on the album. If You’re Reading This’ 17 tracks run long without the bigger production of a similarly long album like Take Care, but there aren’t really any weak songs, either. Latter-half tracks like his back-and-forth with Lil’ Wayne (who’s in fine form here) on “Used To,” the reflective raps on “Now & Forever” over Eric Dingus’ “Trap House 3 Remix” (no, that’s not Grimes) and suddenly animated closer “6PM in New York” all count as highlights. However much If You’re Reading This might be a smaller release between blockbusters, it feels as essential as anything Drake has done.