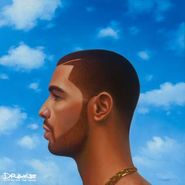 Drake has gone from sensitive Canadian kid actor to the most popular MC in hip-hop. The worst you can say about him is that he’s not the best pure rapper out there and lacks street cred; that’s still true. But as songwriters go, they don’t get much better. Drake is a new kind of hip-hop star, one less concerned with a hard image than he is with making interesting music. Barring the debatable “Wu-Tang Forever,” this is some of his best material yet. “Started From the Bottom” take a cue from his bud The Weeknd with a relentlessly bleak backdrop and a weary tale of success, like he’s reached the top of the mountain barely breathing—it’s a hell of a way to start a blockbuster album. “Hold On We’re Going Home” has been all over radio, with good reason, like a hip-hop version of Daft Punk’s latest album, all throwback funk and good time vibes, with Drake’s typically lovelorn lyrics. Despite the flak Drake gets for his rapping, Nothing Was the Same features some of Drake’s best rhymes yet, only including a handful of guest spots (2 Chainz and Big Sean add some welcome outside voices on “All Me”) and instead delving deep into Aubrey Drake Graham’s psyche and insecurities. “I hate that mom’s cooped up in her apartment, tellin’ herself that she’s too sick to get dressed up and go do shit” he says on the wrenching “Too Much.” Drake breathlessly delivers “The Language” in triplet cadence and lightens the mood (“She just wanna smoke ‘n’ f*ck, I said, ‘girl that’s all that we do’”). By the time he delivers the line “just give it time, we’ll see who’s still around a decade from now” on epic closer “Tuscan Leather,” Drake’s got little left to prove. If the haters provide fuel for his fire, haters keep hatin’ cause Nothing Was the Same is a beautiful smackdown.