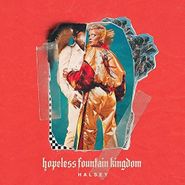 High off the success of her first #1 single, a guest vocal on The Chainsmoker’s inescapable “Closer,” the 22-year old pop singer-songwriter releases her second studio album with Hopeless Fountain Kingdom. The beats are bigger, the choruses soar higher, but at the center of it all remains Halsey’s inimitable pop storytelling and stadium-filling voice. Particular highlight “Eyes Closed” brings Halsey’s wistful angst together with The Weeknd’s detached hedonism on a song that could both soundtrack a packed club or a long, dark night of the soul. An icy, crystalline electronic R&B album that sets itself apart from the pack with plenty of heart and wit.