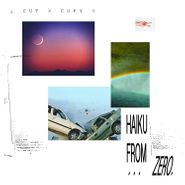 Cut Copy have been steadily updating their dance pop template since 2004, incorporating different influences on each passing album. 2008’s breakthrough hit and blog house touchstone In Ghost Colors shared DNA with synthy '80s club staples like Pet Shop Boys, 2011’s Zonoscope took cues from big AOR pop and house-crossover, while 2013’s Free Your Mind unabashedly found solace in the late '80s rave scene on an album that wouldn’t sound out of place at Factory Records’ (in)famous Hacienda. In this tradition, Haiku from Zero finds them drawing on funky, squiggly new wave such as Talking Heads and Tom Tom Club, while infusing these musical signifiers with their unique melodic sensibility. The party is a bit more subdued this time around, even a tad melancholy on tracks such as album closer “Tied To The Weather,” which pairs downcast lyrics over a glitchy vocal sample, before launching into a lovely Beach Boys-worthy chorus that sounds like it stretches several miles wide. “Airborne” represents the other end of the spectrum; all skeletal funk guitars propelling skittering funk and enhanced with some spacey synth work straight out of Brian Eno’s control room circa 1980. The perfect comedown album to the 4am rave.