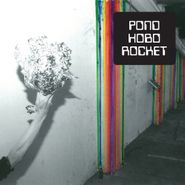 Badass Zeppelin riffs barrel through guitar wash on "Whatever Happened to the Million Head Collide," the opening song on Pond's psychedelic thriller of a record, Hobo Rocket. Three members of fellow Aussie psych poppers Tame Impala and a revolving cast of others make up the amorphous pool that is Pond. The freewheeling nature of these songs reflects an obvious decision on the part of Pond's members to let loose and have a good time, but Pond's songs aren't messy or showy. "Xanman" is as catchy as anything in Tame Impala's catalog, those volcanic riffs burning into your skull as Nick "Paisley Adams" Allbrook screams about the guy who visits you in your sleep and other trippy ephemera. Though they touch on the psych greats of the past — "O Dharma" is a bit of Beatles fun circa Maharishi -— the album doesn't feel too derivative. And anyway, Pond is more about the performances. The guitarists harmonize their notes like angels in the dreamier moments and duel like titans when they go full-bore, while Allbrook can coo like MGMT's Andrew VanWyngarden and screech like a Norse black metal singer. Even while seeming like the recordings of a bunch of friends hanging out for a bit and having some fun, Hobo Rocket is one of the best psychedelic rock releases of the year.