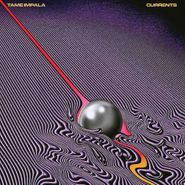 Tame Impala’s Kevin Parker shifts gears a bit for his third album, drawing as much from ’80s soul and disco as he has from prog-rock and psychedelia. Though such a change could threaten to derail a good thing, Parker is the consummate perfectionist, and Currents’ various strands are braided together without a hair out of place. Opener “Let It Happen” builds from a proggish uphill chug into a psychedelic freakout and finally hits its stride with a silky disco beat. “Eventually” relies on rock dynamics but uses fat synthesizers to achieve its booming changes. And a tune like crystalline psych-funk jam “The Less I Know the Better” seems to marry all of Parker’s influences into a perfect amalgam, calling to mind everything from Michael Jackson to My Bloody Valentine. Through it all, Parker is the same chill knob-twiddler he’s always been, but he’s come out of his shell a bit more—it takes confidence to command a song like “’Cause I’m a Man,” which gloriously oozes ’70s cheese, akin to Gary Wright’s “Dream Weaver” or 10CC’s “I’m Not in Love.” From the get-go, Parker himself seems to be reflecting on the change—“Something’s trying to get out/And it’s never been closer,” he sings on “Let It Happen.” It’s confirmed by the time we get to “Yes I’m Changing,” ostensibly a breakup ballad but it seems more pointedly about an introvert accepting accidental stardom (“Curse indulgence and despise the fame/There’s a world out there and it's calling my name”). This lyrical theme, the sense that Parker is coming into his own as not only a songwriter and performer but human being, gives Currents a unity that even the superb Lonerism didn’t have. In every way, Currents is a complete triumph, both as a fascinating headphones album for production junkies and as a set of immaculate psych-pop songs that feels endlessly giving.