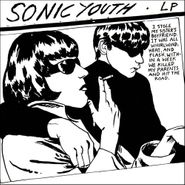 Goo was released in June of 1990 and was Sonic Youth's sixth studio album. But Goo was my first Sonic Youth album. And of course because of that will always be my favorite! They had been putting out albums throughout most of the '80s. But I really didn't know who they were until the '90s and until this album came out. Years later I would go back and discover their earlier albums. But their early '90s period is still my favorite. I was also a big fan of Dirty from 1992, Experimental Jet Set Trash & No Star from 1994 and Washing Machine from 1995. Goo was their first album on a major label and part of the reason they got more exposure with this album. I know this was seen as a sell out for many of their old fans. But I didn't ever know they were a band before 1990 so I was just happy to have them in my life finally. The album featured "Dirty Boots," "Kool Thing" & "Tunic (Song For Karen)."  The cool thing about this album is that they made a video for every song on the album and released it on VHS. It made me love the album even more. And they did a song about Karen Carpenter! I have seen this band live probably a dozen times over the years and they still remain an important part of my life. I thought they were the coolest thing ever when I first started listening to them. And I was glad to be into a band that was not from the UK! This album started my love affair with Sonic Youth. It will forever be one of my favorites.