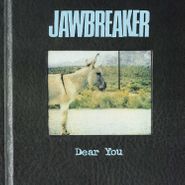 It’s hard now to imagine the backlash that emo progenitors Jawbreaker faced upon releasing their fourth and final album, Dear You. Released after the band was swept up into the major-label alternative-rock boom of 1995, Dear You stands as a potent statement from the era, craftier and more incisive than most of its contemporaries. “Save Your Generation” introduces the band’s penchant for unpredictable chord changes and melodies even while following the tenets of alt-rock and the pop-punk that would follow it. “Fireman” is the should-have-been rock radio hit of the album, stuffing a breadth of catchy and corrosive movements into its four minutes. The band’s musicianship is outstanding throughout, favoring intricacy to the simplicity that ruled at the time on tracks like emogazer “Accident Prone.” It’s true that their tourmates Nirvana loom largely here, and that the scrappier style of albums like their classic Bivouac is missed. But some of that can be attributed to frontman/guitarist Blake Schwarzenbach’s vocal chord polyp surgery and wildly different budgets for this album and previous ones. As far as indie/punk bands going mainstream, Jawbreaker actually cleaned up nicer than most and stayed true to their core sound — and the sound of Dear You ultimately found plenty of imitators, though none got it this right. If you’ve already checked out the band’s other reissued albums, Dear You is definitely worth revisiting or listening to for the first time.