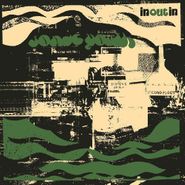 In/Out/In is a treasure trove for Sonic Youth fans craving more from the dearly-missed band. It’s a collection of largely never-before-heard material from the band’s 2000-2010 era sessions, with Kim Gordon, Thurston Moore, Jim O'Rourke, Lee Ranaldo, and Steve Shelley experimenting and exploring the limits of sound together. Expect ambient grooves, haunted vocals, and furious riffs. In short, as always with this band, expect the unexpected. A fascinating look at one of our era’s most influential bands at work in its final days.