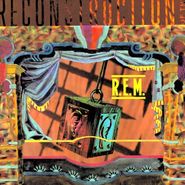 The third and darkest of R.E.M.’s records, Fables of the Reconstruction is a Southern gothic masterpiece. Every half-decipherable lyric and fleeting image, each nerve-jangling rhythm, the brooding production by folk-rock legend Joe Boyd (Nick Drake, Syd Barrett-era Pink Floyd), and even the mysterious album art tangles the band like Kudzu in its southern roots. But this isn’t any wave-the-Rebel-flag, rah-rah Muscle Shoals ode. Here, the songs share a fevered-dream quality; the melodies are darker, Peter Buck’s jangling arpeggios sound knottier and read more primal, and the counter-melodies between singer Michael Stipe and bassist Mike Mills are more like siren calls and S.O.S. signals than front-porch sing-alongs. “Feeling Gravity’s Pull” -- with its strange, half-harmonics guitar riff, tribal beats, sinister strings, and surreal “’Man Ray’ kind of sky” imagery -- establishes the record’s sonic mood in no uncertain sepia-toned terms. “Driver 8,” the thrumming single, is a train-song classic given a 1980s update to include passing images of the South’s vanishing rural life. Relentlessly riff-driven, it takes the wistful twang of Reckoning’s “(Don’t Go Back to) Rockville” and coats it in melancholy too real and fresh to read nostalgic. Similarly, “Kohoutek,” “Green Grow the Rushes,” and “Maps & Legends” all turn the melancholy dial up on the band’s sharp sense of melody, while tracks like “Life & How to Live It” and “Auctioneer (Another Engine)” add paranoid punk energy to the mix. All these shadings were emblematic of the new South, one where isolation (even musically) wasn’t an option any more. By the time of Fables’ release, R.E.M. (and a handful of other college rock acts) had already ensured that Southern rock would never be the same. Nor would R.E.M., ironically, in large part because three albums in, they’d said their piece about the South. Ironically, it took them a trip to London, where Fables was recorded, to get it out of their system, as they summed up in the wistful and ambivalent so-long “Good Advices” -- “A familiar face a foreign place/I forget your name/I’d like it here if I could leave/And see you from a long way away.” Their next record, Life’s Rich Pageant, took them from clubs to arenas, and Stipe turned his narrative attention (and improved diction) to more overtly political and extra-regional themes. Fables’ veiled mystery (not to mention muttered lyrics) proved anathema to this new agenda, and this was the last time R.E.M. songs would feature trains and engineers, comets and dog-catchers, used car salesmen, auctioneers, farmers, sign painters and all manner of Southern-specific eccentrics. The band's growing profile necessitated bigger arena-ready sonics as well, so the intimacy of their first two records and Fables got lost in the new equation. (Fables’ upbeat oddball -- the sax-accented, blue-eyed soul of “Can’t Get There From Here” – could be seen as the canary in the coalmine). A much-expanded fan base greeted post-Fables R.E.M. and world-conquering status followed soon after, as did some memorable music. But for those who’d grown up with the band, Fables was the culmination and artistic high-point of R.E.M.’s most inimitable era.