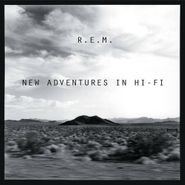 You may not be able to have a new adventure with R.E.M. but now you’ll be able to have a remastered and reissued one. The band’s tenth album, New Adventures In Hi-Fi, is getting spiffed up in honor of its twenty-fifth anniversary and it sounds as fresh as the day it started taking over the alternative radio airways. Along with the classic tracks we’ve all come to know and love, as part of the deluxe edition, fans can look out for thirteen B-sides and rarities, a film, hardcover book, and photos. The liner notes include insights and tributes from the likes of Patti Smith, Thom Yorke and producer Scott Litt. A worthy reintroduction to a band that changed the alt-rock scene.