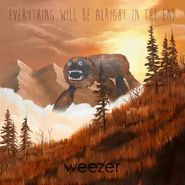 Weezer have had it up to here with Weezer. They make as much plain on “Back to the Shack,” the first single from Everything Will Be Alright in the End, singing a mea culpa: “Sorry guys I didn’t realize that I needed you so much/I thought I’d get a new audience, I forgot that disco sucks.” So Everything is their bid to make things right, packing all of the catchy melodies they’d been neglecting as of late into one album. Songs like “Ain’t Got Nobody” bring back the pizza party power-pop and rocketship riffs of their early work, with “Happy Days” melodies aplenty in songs like “Eulogy for a Rock Band.” And Best Coast’s Bethany Cosentino shows up to co-write and trade off vocals on the catchy “Go Away,” which could’ve easily fit on a Best Coast album as well and shows just how much Weezer remain influential. Their reverence to the same ol’ influences and lyrical territory is summed up by the intro to “Lonely Girl,” which just repeats a few chords and the words “My lonely girl” four times, before following with “so baby come on.” But it comes off as charming here for the first time in a while, sounding legitimately like a band of high school friends still in love with classic rock ‘n’ roll. Things get a little corny now and then, as they often do on Weezer albums—there’s a silly little pop song called “The British Are Coming”—but they pair those kind of sentiments with strong melodies. By the time we get to the album’s metal-inspired trilogy ending, it’s like, who cares, it’s Weezer and they’re doing their thing. With the solid Everything Will Be Alright in the End, Weezer restore that kind of faith from their audience and probably will strike a chord with a few new young fans along the way, too.