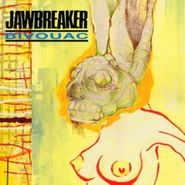 Unlike some of its alt-rock contemporaries (call it emo or whatever, Bivouac is firmly 1991 in sound), Jawbreaker’s Bivouac is ripe for reissue because A) it can’t be found in your average record store, B) it was overlooked during its time and C) it has aged better than your average album of the era. Beginning with the roaring “Shield Your Eyes,” the album still hits hard, thanks to Blake Schwarzenbach razor vocals and the band’s scrappy attack. “Chesterfield King” echoes the boozy swagger of their elders in the Replacements, while “Sleep’s” sheet of guitars and hushed melodies place them as both Husker Du’s heir and as a band making music akin to their shoegazing brethren across the pond. For new listeners, especially those interested in some of the roots of emo, the brutal “Parabola” and the title track, which balances delicate passages with high-octane chunks of ferocious noise for 10 breathtaking minutes, should be elucidating in and of themselves. If only emo had stayed as good as Bivouac, we’d all be better off! The LP has four fewer tracks than the CD (as it did in the original pressing); the Chesterfield King EP also is reissued, including those four tracks (“Tour Song,” “Face Down,” “You Don’t Know…” and “Pack it Up”).