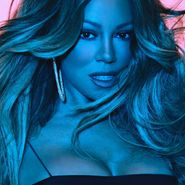 Pop divas don’t get much larger-than-life than Mariah Carey. That’s a rarified stratum in pop culture that is accessed only through a combination of world class talent, coupled with peak MTV-era overexposure (as well as the resulting hangover), and having your very own immortal Christmas standard to boot. Caution is her fifteenth album overall, which is certainly indicative of a workaholic career, yet more importantly it’s only her second collection of all original material released this decade. No longer beholden to the insatiable pace of a meat grinder industry, Mariah Carey has time to create and release the albums she wants to make. As a result, there is an unmistakable quality to her recent works that had been missing in her mid-to-late '00s marathon. Caution is no different, however, unlike the statement-making length of The Elusive Chanteuse, it runs a brisk 38 minutes and is largely composed of Mariah embracing her role as the R&B slow jam queen. Songs such as “GTFO” and “With You” sound like a sultry, smoky update on her many '90s ballads, with only the production hinting that it's 2018. But when she does liven up the pace it just goes to show the depths of her pop acumen: Mariah can still crank out bangers with the best of ‘em. On what is undoubtedly the album’s highlight, “The Distance” manages to deftly combine a deep, deep groove with diva-sized vocal acrobatics. Skrillex, who produced the track, does his best impression of retro-futurist funk lords Benedek, Sasac, and Dam Funk, mixing '90s R&B synth flourishes with a comically fat bassline. It’s as groovy a production as you’ll hear all year, hell; it would even sound great as an instrumental. Add Mariah Carey (along with a well-timed Ty Dolla $ign verse) to the mix? You’re gonna need to cool off after this one.