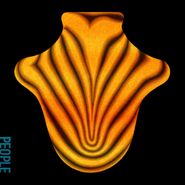 Justin Vernon is never out of surprises. The Bon Iver mastermind’s predilection for left turns dates as far back as when he followed 2008’s surprise phenomenon For Emma with the twitchy weirdness of Volcano Choir or that immortal opening vocal turn in Kanye’s “Monster.” Big Red Machine, Vernon’s collaborative project with The National’s Aaron Dessner, has roots in the 2009’s Dark Was The Night super-compilation, which found the then-unnamed duo writing a song called…yep, you guessed it. However, as harmonious a pairing or not you might imagine existing between Bon Iver and The National, there’s not much you can do to prepare for a song like “Gratitude,” which opens with a Radiohead-esque drum machine and an endlessly chiming guitar line over which Vernon warbles in autotuned semi-syllables, sounding not unlike Young Thug, before bursting through loud and clear: “Well I better not fuck this up!” while the pastoral drone chimes on and on. Like a scaled-down version of The National’s slow-burning U2isms, many of these songs are constructed on an evocative guitar motif and build from there, adding and subtracting puzzle pieces along the way. Yet Big Red Machine resembles The National about as much as it does Bon Iver’s kaleidoscopic 22, A Million, which is to say sort of but not really. What Vernon and Dessner create is more a haunting, rustic minimalism akin to Bruce Springsteen’s Nebraska as filtered through Frank Ocean’s Blonde. Bob Dylan through glitchy electronics. 21st folk music, no doubt.