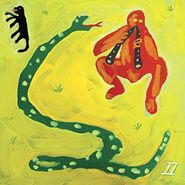 It’s weird to call a relatively young band prolific, but Bay Area psych-rockers Wand have just released their third album in 13 months. What’s even weirder is that every album has been great and subsequently better than the last. 1000 Days is perhaps their most pop-oriented, with paisley tunes buried under thick slabs of muffed-out proto-metal guitars on songs like “Grave Robber.”  Melodies don’t play second fiddle to volume here, and it’s amazing how much they can exist in harmony — a song like “Paintings Are Dead” has some seriously pretty verses, along with absolutely pulverizing noise, like The Kinks jamming with Blue Cheer. The groovy “Dungeon Dropper” is one of their best tracks yet, its snaking riffs tying around its lilting melodies like a noose around a sunflower. Far out and fucking killer.