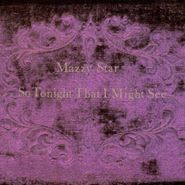 Mazzy Star had already released She Hangs Brightly in 1990. But I didn't first notice them until So Tonight That I Might See was released in 1993. You really could not avoid the song "Fade Into You" that year. I was hooked by that song. I was not alone. It was hard not to like them. Mazzy Star is Hope Sandoval and David Roback. David had played in the Rain Parade in the '80s. He was also a member of Opal. Opal recruited Hope Sandoval after the vocalist left and soon turned into Mazzy Star. These guys were are mix of psychedelic rock and dream pop. Mazzy Star are one of the few bands from these lists not from England. They were actually formed in Southern California just like Medicine. Hope has one of those voices like no other. The band put out Among My Swan in 1996 and then took a long break. Hope Sandoval has put out a couple of solo albums over the years. But Mazzy Star is back and will soon be releasing an album of new material any day now. This album is dark and dreamy. It can easily lull you to sleep. The album features the songs "Fade Into You" and "Into Dust." It is one of those albums that just might break your heart in two. But it is worth it. A beautiful masterpiece of the '90s.