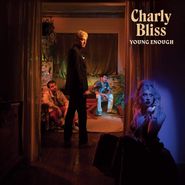 While plenty of female-led indie rock outfits lean into the early ‘90s for sounds and aesthetics, Charly Bliss have already emerged through the other side of the inspiration looking glass, to when “post-grunge” became an actual genre and not just a point of demarcation. When alt rock bands began to experiment in merging their guitar fuzz and existential loathing with retro synthesizers and classic '60s pop songwriting. Young Enough takes the band’s infectious guitar-heavy power-pop blueprint and adds programmed drums, dance beats, Blade Runner synths, and endless other wrinkles. Shades of The Rentals, Helium, and Superchunk’s Indoor Living all over this one.