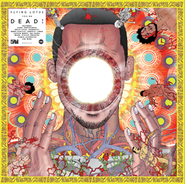 Flying Lotus’ fifth album is as strikingly original as anything he’s put out while also becoming streamlined. Of course, to the uninitiated, it’s still pretty nuts. “Theme” builds on droning orchestration before exploding into a jazzy interlude that sets the tone for the next few tracks. “Tesla” shuffles and pings back and forth like its titular Tesla coil, while “Cold Dead’s” dense and mind-bending harmonies excite while lush horns and synths relieve the senses. Here’s where You’re Dead gets fun. “Never Catch Me” finds a hopped-up Kendrick Lamar spitting rhymes as quickly as they’ll come over FlyLo’ head-spinning twists and turns. Captain Murphy and Snoop Dogg jump in for a fun 8-bit spin on FlyLo’s sound in “Dead Man’s Tetris.” On “Coronus, the Terminator,” FlyLo sets the stage with backwards instrumentation and rain while Singer Niki Randa’s breathy voice helps create a futuristic Quiet Storm track. Angel Deradoorian continues the spell on the mystical “Siren Song,” and  “Turtles” sounds like it would soundtrack a hip wildlife special, with its echoing bird calls and cascading bassline. Now here’s where it gets insane again, as Thundercat asks, “Can you feel the walls are closing in?” through Radiohead-level paranoia and ominous melodies on “Descent Into Madness,” which leads into the true madness of “The Boys Who Died In Their Sleep,” with a creepy-ass vocal by Captain Murphy. But it’s all good by the time we get to the end, and we feel like we’ve truly been on a journey. By balancing his headier material with pop-oriented moments, Flying Lotus takes us on a one-of-a-kind trip with You’re Dead.