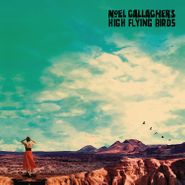 Noel Gallagher probably generates more buzz with his weird quotes and rivalry with Oasis bandmate and brother, Liam Gallagher, than he does for his music. (He recently combined both of these things by referring to his brother as the "village idiot" in the press.) But his latest album, Who Built The Moon, is intriguing in that it's more of a post-modern take on The Beatles, rather than blatantly soaked in their influence like Oasis (don't tell him that). This one mines Phil Spector's lavish productions on albums like George Harrison's All Things Must Pass and John Lennon's Imagine, where pop songs and ballads are transformed into miniature symphonies with his famous "wall of sound." Instead of creating a barrage of sounds, however, Who Built The Moon relies on heavy drums and horns to make these songs really sound big. From the moment the hard psych groove of opening track "Fort Knox" starts to melt your brain, you'll be won over. It's a total trip, complete with banging drums, spinning voices, alarm clocks and some genuine craziness. The following track, "Holy Mountain," represents the rest of the album's direction - instantly catchy, with blaring sax and sardonic lyrics. It feels more seventies that sixties with its pure power-pop energy. This may easily be Noel Gallagher's best album since his time in Oasis, as he crafts a beautifully weird pop album that totally stands out in 2017.