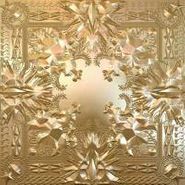 Watch the Throne, which gathers two of hip-hop's best, musically isn’t the grand statement of West’s My Beautiful Dark Twisted Fantasy or Jay-Z’s The Black Album, but it’s more fun than either of those albums. Kanye pulls out a lot of his tricks — the vocoder vocals on “New Day,” the revered-musician-turned-sample in “Otis” (featuring Otis Redding) — but it doesn’t feel like a rehash. There’s enough excitement here to warrant any retreads — frankly, both rappers, almost known as much for their braggadocio as for their game-changing albums, sound liberated to be sharing the spotlight. There are plenty of radio jams here, like the old-school, A Tribe Called Quest-ish “That’s My Bitch” and the Beyonce guest-starring “Lift Off,” and there are some real stunners here, too, in line with the forward-pushing musicality of both Jay-Z’s and Kanye West’s finest works. Frank Ocean lends vocals to a couple of gems, notably the polyrhythmic “Made in America,” which honors black heroes, while “Murder to Excellence” rides a Radiohead-style riff, sampled children’s voices, bongos and brilliant trade-off verses between the rappers to “a celebration of black excellence,” as Jay-Z so memorably puts it.