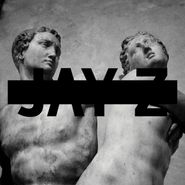 Regularly considered one of the best rappers alive, only Jay-Z could get away with naming his album something as audacious as Magna Carta Holy Grail. It’s a welcome bit of braggadocio from an artist who lately has become more known for his personal life rather than his epic run of albums, from 1996’s landmark Reasonable Doubt through his excellent 2011 collaboration with Kanye West, Watch the Throne. Magna Carta sees Jay-Z standing at the top of the hill and raining down tales of riches and his luxurious lifestyle like a king regaling his subjects. Opener “Holy Grail” opens the album explosively, featuring Justin Timberlake singing a lovelorn melody, a couple of lines lifted from “Smells Like Teen Spirit” and a reference to Michael Jackson’s Thriller. Clearly, he wants this to be the big statement fans have been waiting for. While Magna Carta’s overly long running time doesn’t certify it as a classic, it successfully reintroduces Jay-Z as a Gatsby-style, rebellious millionaire — “fuck it, I want a billion,” he declares on “Picasso.” While he’s traded from street stories to art galleries and runways, his eye for detail is no less great while describing the lap of luxury — “I don’t pop molly, I rock Tom Ford,” he says on a minimalist, bangin’ track that shares its name with the fashion designer. He trades rhymes brilliantly with Rick Ross on “FuckWithMeYouKnowIGotIt,” is supported by a typically lush vocal take from Frank Ocean on the tumultuous “Oceans,” and gives himself a pat on the back for making it against the odds in the sparkling “F.U.T.W.” Magna Carta works best when its beats, largely from Timbaland and J-Roc, stay minimal and chic, complementary of Jay-Z’s current lyrical fascinations of wealth and religion (on the conflicted “Heaven”), though Hit-Boy and Mike Dean break it up nicely with a jazzy backdrop for “Somewhere in America.” He also successfully duets with wife Beyonce on a love song without inducing the gag reflax, on the sultry, funky “Part II (On the Run).” It’s a bit unwieldy, sure, but Magna Carta Holy Grail is undoubtedly the work of one of the geniuses of hip-hop and shouldn’t be missed by any fan of Jay-Z or hip-hop in general.