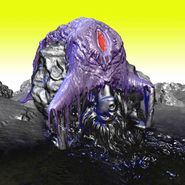 My girl doing her thang. Beautiful orchestration, the melody in between melodies, more on the honest side than abstract lyrics.

Vulnicura is the album Bjork fans were longing for. Co-producing with white-hot underground beatmaker Arca, Bjork crafts some of her most singular and affecting music yet, writing complex string arrangements that elevate the drama in songs like “Stonemilker” to that of classics like Homogenic’s “Joga” or “Bachelorette.” Vulnicura measures the effects of the end of a relationship—the end of Bjork’s partnership with artist Matthew Barney serves as the catalyst—and she acts as an emotional scientist on tracks like “Lionsong,” tinkering with what’s left in the aftermath (“Should I throw oil on one of these wounds? But which one?”) amid vocal manipulation that calls to mind her work on the voice-centric Medulla. As that striking album art portrays, the core of Vulnicura is a gaping wound. On “History of Touches,” she sees every touch and sexual ecounter as a singularity, illustrated by electronics that glow like an aurora borealis. But her shield of objectivism crumbles on “Black Lake,” Vulnicura’s absolutely devastating centerpiece. Over 10 minutes, Bjork details how hitting absolute bottom at the end of a relationship that feels like a life’s worth of work coming to and end. Every so often, the music, a dark swirl of strings and beats supplied by Bjork and Arca, cuts out for a strange, long coda that feels like a necessary swallowing of air before she delivers the next stanza, sometimes wearily, sometimes desperately. Each time it hits like a punch to the gut. She’s simply never done anything so affecting before; given her catalog, this alone is remarkable.

Vulnicura doesn’t attempt the tunefulness of her early work, but this isn’t an album about ear-friendly pop. Her voice meanders and layers quizzically on “Family,” but among beats that drop like falling rocks and swarming synths and strings (with some added production by The Haxan Cloak), the effect is much effectively unsettling, like searching for a lost child in a crowd. “Atom Dance” comes up with one of the album’s strongest groove, right around the time Antony Hegarty shows up to trade vocal swoops. By closing track “Quicksand,” Bjork has put herself through the ringer and is clawing her way out—“Define her abyss/Show it respect/Then a celestial next/Will grow above” she sings among beats that hit like slaps to the face. After flailing a bit in recent years, repeating past sounds (Volta) or coming up short of enough memorable songs (Biophillia), it’s great to hear her in top form here. Despite Vulnicura’s aching subject matter, it ultimately feels triumphant, spilling its emotions forth in shades of shimmering black. It’s a deeply personal, sometimes difficult listen, but, like the best of Bjork’s work, it’s also an unforgettable experience.