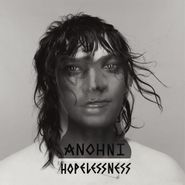 I have been a fan of Anohni (formerly known as Antony & the Johnsons) for a long time now. She has another one of those distinctive voices that there is no confusing for someone else. Another great album produced by the amazing ANOHNI. The words in the songs are so full of emotion and power it is almost too much to handle sometimes. This album somehow feels like it is in the future. The songs are very set in the present. But the music really takes me to the future. Or at least makes me feel like we will be OK as long as we have ANOHNI to help guide us through the uncertain future. - Brad, Hollywood


Just as the artist formerly known as Antony has chosen to go by the name ANOHNI in her personal and professional life, Hopelessness, her debut sans the Johnsons, dramatically refashions the artist’s sound world. With production by Oneohtrix Point Never and Hudson Mohawke, ANOHNI takes her socially conscious lyrics to the world of experimental synth-pop. “Let me be the one, the one that you choose from above,” she sings darkly in “Drone Bomb Me,” one of many politically pointed songs on the album. Similarly, she takes on the role of the victim on the sparkling, Kate Bush-inspired “Execution,” which refers to its titular act as “an American dream.” Over the pounding drums and synth-orchestral pomp of “4 Degrees,” ANOHNI decries the environmental atrocities we’ve enacted with the blackest of black humor (“I wanna burn the sky, I wanna burn the breeze/I wanna see the animals die in the trees”). “I know you love me, ‘cause you’re always watching me,” she sings on the stunning “Watch Me,” an indictment of PRISM and America’s obsession with surveillance. As its title suggests, the album can run dour, as on bleak pieces like “Obama,” which is daring but feels a little on the nose, lyrically. Luckily, Hopelessness balances its dire subject matter with spectacular, pop-minded production that retains touches of the chamber-pop style on which ANOHNI built her musical stature. And on experimental pieces like the electro-jazz of “Violent Man,” her music also has never been more vibrant. Though not exactly full of sunshine and rainbows, by turning a bright light on the things we’d rather ignore, Hopelessness finds triumph.