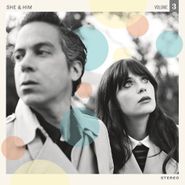 The New Girl and the maestro of soulful folk reunite for their third round, and they seem to have perfected their formula this time. While covers and Zooey Deschanel’s much-discussed (and oft-mocked) quirk threatened to dominate their charming first venture, they grew more mature with Vol. 2 and continue that thread here. Deschanel’s voice and songwriting have both gained in heft yet still feel feather-light. She can softly break your heart, as on “Turn to White,” where her simple, evocative lyrics enchant (“Indian Summer/I caught a glimpse of things to come/Racing to finish/I never think before I run”), buoyed by M. Ward’s sumptuous guitar playing and a swaying, island feel. She’s more corporeal on songs like “Never Wanted Your Love,” curling her mouth over sassy come-ons while M. Ward and co. supply fluttering strings. The duo sing together on the beguiling “Baby,” a simple love lullaby that prove they haven’t abandoned the thing that drew listeners to them in the first place — directness. But the further you get in, the more they’re willing to turn down the cute and replace it with hooks and interesting arrangements, like the jazzy “Somebody Sweet to Talk To,” which manages to have it both ways. Sure, it’s perfect latte-sipping easy listening, but creating such music without inducing the gag reflex is easier said than done. She & Him have it down to an art.