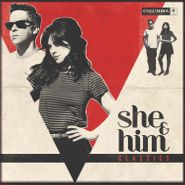 Recorded live with an orchestra, Classics sees M. Ward and Zooey Deschanel beautifully interpret a classy set of standards. She & Him’s attitude can run the gamut from charming to cheeky, but here, they’re pretty reverent of the source material, which was probably the smart way to go. Ella Fitzgerald and Louis Armstrong’s “Stars Fell on Alabama” gently sways, yet it conveys just how strong Deschanel’s voice has gotten over the years, nailing the nuances as well as the big finish. Gerry Goffin and Carole King’s soul classic “Oh No, Not My Baby” is sumptuously rendered. A couple of tracks feel damp, but none is badly done. The best tracks show Deschanel and Ward’s particular chemistry and style, such as when Ward joins Deschanel to duet on Frank Sinatra’s “Time After Time,” while Ward’s languid take on “She,” originally written by Charles Aznavour and Herbert Kretzmer and performed famously by Elvis Costello for the “Notting Hill” Soundtrack, gives the album a needed international diversion, while Deschanel provides glorious backup sighs and coos. Remarkably, Classics doesn’t feel needless—even a nocturnal take on “Unchained Melody” feels pretty fresh—but rather a natural extension of the sound She & Him have been cultivating over several studio albums. It feels like a new way to enjoy these songs, which, when some of them are as well-worn as they are, says a lot.