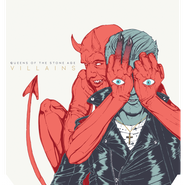 Queens of the Stone Age might very well be one of the last “modern rock” bands, a statement that sounds hopelessly paradoxical as long as there are, indeed, still rock bands out there, but perhaps makes sense if you have a listen to what typically passes as the genre on the radio these days. Not a curmudgeon’s dig at the festival-friendly millennial whoopers of the world out there, just an attempt to place the group alongside their proper peers. Along with a band like Foo Fighters, QOTSA always slotted in neatly with the distortion-driven 3 minute rock song format that ruled late '90s, early '00s radio (and MTV, back when that mattered). Yet unlike Foo Fighters…or Green Day…or Rage Against The Machine, Queens have always had a deep affinity for boogie rock, the kind popularized by famous but not-really-cool-anymore bands such as ZZ Top. And that love of shuffling grooves has only become more pronounced over time, just as the sound of modern rock music has grown increasingly farther away from the world QOTSA inhabit. With mega producer Mark Ronson behind the boards, Villains is a testament to the myriad pleasures of the boogie, featuring a very dry, '70s-influenced production that the band wears well. Every song here sounds impeccably crisp: Guitars leap out with lean, red-hot fuzz. The bass rumbles neatly along. The drums are so air-tight they threaten all the oxygen in the room with funky tension. The atmosphere is of a hermetically sealed classic rock record; one specifically engineered to sound amazing out of the speakers of a Trans Am. Rest assured, it’ll play nicely enough in your Prius too.