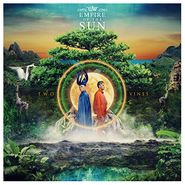 Australian duo Empire of the Sun returns with another ‘80s-influenced electro-pop outing awash in lush synth textures and infectious dance beats. The tracks on Two Vines cover a lot of ground, from tender, romantic ballads to upbeat indie electro tracks perfect for dancing till dawn then watching the sun rise. There’s a cinematic quality to the duo’s best tracks; numbers like “High and Low” and “Way to Go” sound readymade to be cued up over the triumphant final scene of an ‘80s fantasy film — which isn’t too surprising, perhaps, if you’ve ever seen the visually striking group perform live or spent time perusing their album art. On this album, Empire of the Sun prove their ability to not just craft catchy hooks, but to create dance music that makes the world brighter and bolder, if only till the record stops spinning.