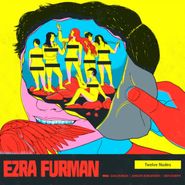 Twelve Nudes, the eighth album by always impassioned indie rocker Ezra Furman, begins by immediately kicking the door down. “Calm Down aka I Should Not Be Alone” is a hell of an opening salvo, its motor-mouthed lyrics gasping to keep pace with its manic beat and razor blade guitars. It’s an appropriate introduction to what Furman labels as “our punk record,” and that particular distinction does not deceive. With a production quality that’s raw and ramshackle, Twelve Nudes finds its guitars and vocals pushed firmly into in the red. Come to think of it, so is nearly every other instrument. This doesn’t mean there can’t be room for nuance or introspection: “Evening Prayer” reminds one of the earnest intensity of peak Wolf Parade, minus the bleepy-bloop keyboards, with throat-shredded signing intact. The album even has its moments of tenderness through the fury, as “I Wanna Be Your Girlfriend” is a stark and stripped-down rockabilly ballad; a sweet transgender love song free of any polemic battle lines. For an album Furman describes as “naked with nothing to hide," Nudes is more than just an extended confessional, it’s a catharsis, too.