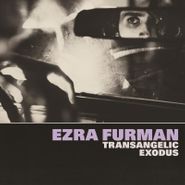 Singer-songwriter Ezra Furman encapsulates a style and mood that couldn't have come from any other era. He has a strange voice that growls and scratches with heavy, loud rhythms and his arrangements, which might have been labeled as very masculine 20 years ago, are completely subverted here. Ezra Furman is openly queer and plays with these sounds to re-explore sexual identity, romance, and to definitely kick dirt in the face of musical expectations and the history of pulse-pounding rock ballads. Transangelic Exodus is his most thoughtfully creative album as it tells the tale of queer lovers on the run with elements of the supernatural and a musical trajectory that gives the album a real sense of narrative heft. From the scratchy first moments of the opening track, "Suck The Blood From My Wound," until it explodes into full glam, there's something liberating with its evocative imagery of breaking out of a hospital and the middle-finger sent to expectations of heteronormative relationships. It's a hell of a way to start the album. "No Place" further examines the ostracized feeling and disassociation from the modern world that goes beyond identity. It delves into the inability to bond with people and a sense of fatalism as you start to feel increasingly out of touch with a world where queerness can seem like a both blessing and a curse. On the other side, "Maraschino–Red Dress $8.99 At Goodwill" is one of the most openly free and joyous tracks on the album. It completely plays with the idea of rock music, gender, and sexuality as Furman creates an intense ballad full of disintegrating synths and vicious guitars about the indecision to buy a dress or not. As the last few years have redefined and destroyed the limits of gender and the status quo, Transangelic Exodus ultimately proves to be a ballad dedicated to our new world that is hopefully becoming more open, free, and liberated.