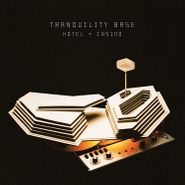 Arctic Monkeys haven’t had a release with this much anticipation since 2007 when Favourite Worst Nightmare was tasked with following up their record-shattering debut. Originally fashioned as a jittery garage rock 'n roll group in the Strokes mold with a predilection for mouthfuls of sharp, hyper-literate lyrics, Arctic Monkeys had a second wind almost a decade later with 2013’s AM. Ostensibly a reinvention at heart, AM featured a moodier, bluesy set of tunes that was also unabashedly pop friendly: “Do I Wanna Know?” is the band’s most successful single yet on this side of the pond. Almost 5 years since that sonic makeover, the band is once again faced with creating the second act to a career defining album.

Leave it to Arctic Monkeys to surprise. With no advance singles to speak of, Tranquility feels like a throwback to the '70s in style and substance. The spirit of glam looms heavily over this album: every song seems to inhabit the same hedonistic, dimly lit lounges that haunt the era, inheriting that louche confidence as well as drunken stumble along the way. “Star Treatment” positions itself as this decade’s “Rock ‘n Roll with Me.” “American Sports” resembles Pulp if sung by the libidinous targets of Jarvis Cocker’s fascination, Ender’s Shadow style. The title track is a baroque funk romp that could have also been titled “Ballad of Maxwell Demon,” packaged on the Velvet Goldmine soundtrack, and would’ve hit the mark much more squarely and convincingly than the Britpop-lite of Shudder To Think. Nowhere on the album do these ‘Monkeys sound at all like they are trying to replicate the ‘Monkeys of AM. The opening couplet of this album goes, “I just wanted to be one of The Strokes.” Don’t be fooled, Tranquility Base Hotel + Casino proves, once again, they can be whoever they want to be.