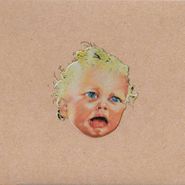 Swans records are more like happenings, unforgettable experiences you have to sit down and pay attention to. The two-hour To Be Kind, released 21 months after the similarly epic The Seer, is no exception. Sounds wriggle, writhe and heave on the hilariously titled “Screen Shot,” but Swans also seem to have more control than ever—these sounds are speaking to one another, albeit in some unspoken language, not creating a cacophony. The effect can be paralyzing. Listening to “Just a Little Boy (For Chester Burnett)” feels like staring into the darkest night, accompanied by a country sway and Michael Gira’s chants, which grow suddenly violent—“I’m just a little boy!” he cries repeatedly, while the guitars bellow and sigh with increasing pronunciation and sampled laughter ups the creep factor into Lynch territory. Gira growls “I need love” like it’s a threat. Meanwhile, “A Little God in my Hands” is Swans’ version of a pop song—thumping percussion (think Tom Waits) meets multiple voices singing over each other, while eerie backwoods instrumentation and sudden noise explosions burst out of nowhere but somehow still leave you bobbing your head along as Gira repeats evocative adjectives (“forever hateful, forever beautiful, forever needing, forever reaching”). It’s easy to attribute pagan imagery to Swans’ music and say it sounds like a séance or something, but the 34-minute “Bring the Sun/Toussaint L’Overture” really does sound like the soundtrack to a sacrifice, or at least some wicked feast. Its slow, long build demands patience, but Gira’s always charismatic voice makes it worth the trip.

There’s a real emphasis on repetition throughout To Be Kind, whether it’s “Screen Shot’s” “no love … no god,” the eternal adjectives of “A Little God in my Hands” or “Some Things We Do’s” nonchalant “we fuck, we love” etc. To Be Kind seems concerned with divesting itself of meaning, as these words become soulless mantras throughout the album. The effect feels hollowing, yet also healing—who can hear the word “love” in a song and feel much at all these days? It’s as though the words are emptied of their power, then restored them by enforcing their meditation.

Frontloaded with more drone-based pieces, the album’s second half moves between heavier, rock-based songs and ones that are relatively subdued (by Swans standards). “She Loves Us” is long at 17 minutes, but it’s continuously intriguing, with a violent bass riff, chanting, whirring sounds all around, pounding percussion, guitar slides and Gira’s barking vocals, climaxing in a descending chorus of Gira’s multitracked voices. Similarly, “Oxygen” features some of Gira’s most thrilling, guttural vocal work, amid anxious guitar stabs and bleating horns. Gira softens up a bit near the end of the album on “Kristen Supide,” singing in a near croon and backed by bells and female vocals for a song that in another setting would seem mildly disturbing but here offers some respite. And on closer “To Be Kind,” Gira sings with a weary earnestness that sounds revelatory after the rest of the album’s mix of bile and detachment. You come away To Be Kind feeling riveted, not exhausted, a feat for an album of such mammoth proportions. Once again, Swans create one of the hallmark albums of the year, something that feels like it changes you and, however ugly and demanding it may be, we should feel honored to experience.