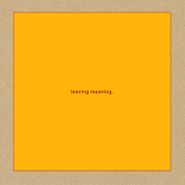 Throughout their cycle of life, death, and rebirth, Swans never lose their punishing, compelling power. leaving meaning is the first Swans album since Michael Gira dissolved the band’s existing lineup in 2017; the band now consists of a revolving cast of musicians, selected for how they’ll contribute to the atmosphere of an album. This time around, the band features the work of Gira, The Necks, Baby Dee, Ben Frost, Anna and Maria von Hausswolff, Larry Mullins, Kristof Hahn, Yoyo Rohm, and Jeremy Barnes and Heather Trost…and that’s not even close to the entire “who’s who” behind the album. The musicians play beautifully together, the combined talents of each artist serving the greater whole to create haunting, intimidating, brutal songs that rank among the best of Swans’ output. A monumental release from one of the most intense, devastating bands in modern music.