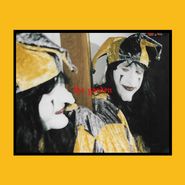 No current band plays by their own rules quite like The Garden. Beginning in the early 2010s as slightly art-damaged dance punk weirdos on Burger Records, they quickly stood out amongst a sea of echo-drenched Black Lips copycat acts. Their inspired individualism quickly earned them a rabid, if somewhat localized fanbase. Now on renowned pop punk label Epitaph, The Garden have a bigger stage than ever before, yet they remain true to their core sound and ethos: a sort of '90s-influenced punk skronk, complete with dissonant, distorted basslines and booming drums (think Jesus Lizard) mixed with unabashed radio pop flourishes and elements of hip-hop, industrial, and EDM without regard to previously-held aesthetic sensibilities. Mirror Might Steal Your Charm streamlines some of the eccentricities of their Epitaph debut, 2015’s haha, into a less spastic collection of material that perfectly emphasizes their unique strengths. Where else will you find a tune like “Destination,” which melds its churning, metallic rhythm section to twinkling piano and a chorus Jimmy Eat World would kill for? Much less side-by-side with blasts of hardcore punk action such as “Stallion”? Nowhere, at least not until the next Garden album comes out.