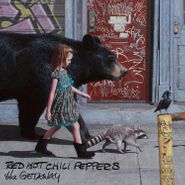 The Chili Peppers' first album in five years is also their first without legendary producer Rick Rubin since their 1991 hit Blood Sugar Sex Magik. This time around wunderkind Danger Mouse took the reins as producer which has resulted in a fresh, new take on the seasoned band. Their second go around with guitarist Josh Klinghoffer (a collaborator of former Chili Pepper, John Frusicante) has also proven fruitful, as his guitar style seems to have gelled quite nicely with the band. The title track, "The Getaway," has a tight, understated groove and ringing, atmospheric guitars with just a touch of Danger Mouse's trademark studio sound, while "Dark Necessities" features a less manic but fully funky Flea bass line.