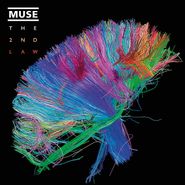 Muse’s The 2nd Law begins with such a jarring Black Sabbath-style riff on “Supremacy,” it’s almost a relief when the James Bond strings come in and Matthew Bellamy starts singing “true emancipation is a fantasy.” But then The 2nd Law throws yet another curveball, as “Supremacy’s” pomp gives way to the head-popping electronica of “Madness,” their catchy first single that breaks with their traditional sound in a way Muse didn’t have to — this band could have churned out another album full of songs like “Knights of Cydonia” and watched the royalty checks come in, but the glammy, Princey vibe of “Madness” is a welcome update. Rawk fans may balk, but the new sound suits them well and actually vibes with the older material for their similar reference to different elements of glam, prog and art-rock — check out the “Another One Bites the Dust” update of “Panic Station,” or how the Laurie Anderson-style vocal loops underneath Olympics anthem “Survival” cuddle up to its deep-voiced and angelic choral backup vocals, flying into a theatrical rock tornado that sounds like Pink Floyd actually soundtracking The Wizard of Oz. Muse has always been theatrical, but they really indulge their inner Broadway band with songs like “Explorers,” a piano-led power ballad that shows Muse appreciates both the rock and Phantom of the Opera sides of glam. Less thrilling are songs like the U2-ripping “Big Freeze,” which ends up sounding more like The Killers, given its schmaltziness, but all is quickly forgiven when the album reaches its apex at the motor riffery of the first part of its two-part title track (the second half is a prog take on dubstep, FYI). For all of The 2nd Law’s variety and strange steps, it hangs together remarkably well, unified by a sense of bigness that Muse have never shied away from, making their clearest attempt yet at a Mellon Collie or The Wall-style guitar epic.