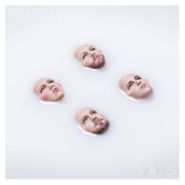 When Kings Of Leon first came on the scene in the early 2000s they were referred to as the "Southern Strokes," and while over the years they've proven to have more to offer than just country attitude over east coast guitar pop, you could say that "Reverend," the second track off their new album, WALLS, is just that. With its post-punk, thumping bass line and heavy rhythm guitar the song sounds like a sort of cross between a Skynyrd power ballad and a downtown NY garage rocker. As the album opens with the guitars on "Waste A Moment" you'll feel that excitement you first felt while listening to their early albums Youth & Young Manhood and Aha Shake Heartbreak. "Around The World" mixes Caribbean/Carnivale vibes with dico-punk and features some of the grooviest lead guitar heard on any of their albums, while Caleb Followill's vocals on album closer "WALLS" are some of his most pure and powerful yet.