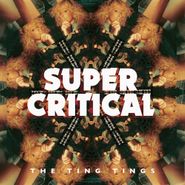 The Ting Tings are back with their third album, which seeks to refine their party-rock sound without losing the swagger that made them so fun in the first place. With producer Andy Taylor (of Duran Duran) on board, the British duo load up on funk riffs, ’80s beats and Katie White’s commanding vocals, which can lead an anti-hater singalong on “Super Critical” and switch to half-rapping sassitude on the Bow Wow Wow-esque “Daughter.” Together with collaborator Jules De Martino, they lead the charge through new-disco tracks that actually pay homage to the originals by the likes of Chic and Earth, Wind & Fire, on standouts like single “Wrong Club,” while still sounding radio-ready and relevant on tracks like the synth-heavy “Communication.” Importantly, the band seems to have learned how to temper the attention-baiting attitude of early songs like “That’s Not My Name” with better melodies and stronger production that makes a more lasting impression. So the Ting Tings are able to have their cake and eat it too—Super Critical is smart, but it’s still as fun a pop-rock album as you’ll find.