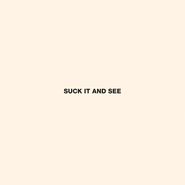 Imagine being alternately called the next Beatles and the current Indie It Band, having a blitzkrieg of darling press with crazy enviable record sales, and doing this barely out of your teenage years. That’s what British post-punk revivalists Arctic Monkeys have already done. Now older (mid-twenties!), they return with their fourth album Suck It And See, which goes in for the vintage feel of their smash initial album Whatever People Say I Am, That’s What I’m Not. Another item of note, this latest LP has the catchiness that seemed to drift away with 2009’s Humbug—look no further than “Piledriver Waltz” and the single “The Hellcat Spangled Shalalala” for audio evidence of the fact.