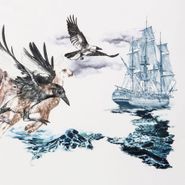 Longtime Toronto-based collective Do Make Say Think continues to crescendo their place into the post-rock pantheon. In a genre that is most frequently described as “cinematic,” Stubborn Persistent Illusions definitely has its share of widescreen moments. “Bound” opens with twinkling arpeggiated guitars and bubbling synths over shuffling drums, continuously working up to a big, wordless refrain that radiates pure joy. It’s Explosions In The Sky by way of Neil Young’s ranch, a pastoral sound that sounds like it was captured in an open field with a billion stars blinking all around. However, it’s the diversions into farther, more abstract spaces that set DMST aside from the purely major-key histrionics of their contemporaries, as the very next track, “And Boundless,” changes course into jarring rhythms and sharp blasts of guitar and organ before settling into a sustained melancholia. It’s not quite pure dissonance, but an angular arrangement that’s closer to Swans than Sigur Rós. Elsewhere, “Her Eyes on the Horizon” is a folk jam heard from the other room, just before walking into the glorious sound of the band achieving critical mass and blasting off into the heavens. For those who might think there’s nothing left to be done in the world of instrumental rock, Stubborn Persistent Illusions widens the palette and raises the bar. A constantly engaging and evolving work of art.