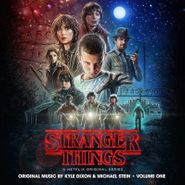 The series has many things going for it… But what really sent me over the edge into TV fandom was the music. Cold, Carpenter-esque synth trills glide through the series like sonic glaciers, and soon enough the soundtrack and the show become inseparable concepts, not unlike the pairing of music and mood in Twin Peaks 25 years before.

The soundtrack to this summer’s throwback horror series Stranger Things has been getting just as much buzz as the show itself, and with good reason. Scored by Kyle Dixon and Michael Stein, members of the Austin, TX synthwave group S U R V I V E, the soundtrack hits all the right notes for fans of John Carpenter (both the movies and the music) and classic ‘80s horror. Vol. 1 starts with the show’s now iconic opening theme, seamlessly moving from tracks that are eerie and evocative, hard-hitting and tense, and even gentle and soothing. You don’t even need to have seen the show to dig these retro synth tunes; this first volume of the soundtrack stands on its own.