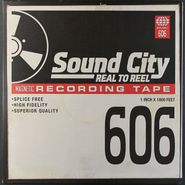 A heavenly cast of musicians (Stevie Nicks, Trent Reznor, current members of Black Rebel Motorcycle Club and Queens of the Stone Age and former members of Nirvana, to name a few) help Dave Grohl pay homage to Sound City Studios and its analog recording console, the Neve, for this soundtrack to Grohl’s documentary on the studio, Sound City: Real to Reel. Robert Levon Been, Grohl and BRMC’s Peter Hayes strum up Jesus & Mary Chain-inspired din on opener “Heaven and All.” Nicks turns in a sultry vocal performance over the dark groove of “You Can’t Fix This.” Fear’s Lee Ving growls through “Your Wife is Calling,” while Grohl, Foo Fighters drummer Taylor Hawkins and ex-Nirvana/Germs guitarist Pat Smear provide a breakneck, noodling scrawl. QOTSA’s Joshua Homme moves from desert folk to metallic grunge in “Centipede,” then gets power-glammy with Grohl on “Trick With No Sleeve.” Of course, most people are now familiar with the former Nirvana members’ backing of Paul McCartney through the snarling “Cut Me Some Slack,” worth the price of admission alone to hear such titatic talents slam into each other musically. But the rest of Real to Reel has its share of surprises, too, and it’s a feast for classic rock fans looking to hear their heroes recorded on some of the best equipment around. Feed your rock hunger with Sound City!