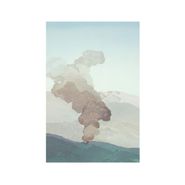 Sun June have released a solid new album of dreamy, melancholy indie pop. Singer Laura Colwall's sweet, airy voice -- she sometimes sounds like Feist -- unspools alongside gentle, sliding guitar melodies, synths and booming bass, especially on the charming track, "Bad girl." "Singing" has a touch of bluesiness to it that calls to mind Cat Power, and a strong, uplifting outro that makes it an album highlight. "Everything I had" features the kind of arresting basslines and shimmering accents that turn a simple song into a total earworm.