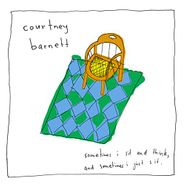 As you might imagine from that album title, Courtney Barnett has a lot on her mind. Whether it’s mistaking someone’s rooftop solitude for a suicide attempt on “Elevator Operator” or her own troubled headspace, the Australian singer-songwriter has a rare knack both for storytelling and confessionalism that strikes a chord—Barnett’s songs are self-deprecating, funny and searingly honest. Among the litany of anxiety-fueled thoughts that race out of Barnett’s mouth on the extraordinary “Pedestrian at Best,” the best has to be the apropos-of-nothing “I’m a Scorpio!” she yells before hitting back into that stomping chorus. Barnett can make the most mundane moments captivating, chronicling sleep-deprived thoughts on “An Illustration of Loneliness” (“I lay awake at 4, staring at the wall, counting all the cracks backwards in my best French”) in a fittingly lackadaisical manner similar to the brilliant “Avant Gardener” from her previous release, The Double EP: A Sea of Split Peas. Barnett’s ability to pull us in with detail and personality sets her apart and keeps the album from feeling solipsistic, while she and her band keep things snappy with tumbling garage-rock riffs. A search for a new house becomes heartrending when she realizes the previous tenant was a Vietnam vet who died, on the terrific “Depreston.” A single sneeze threatens to end a relationship on “Dead Fox.” Whatever Barnett is feeling, however seemingly small, we feel it too. “I don’t know quite who I am, oh good man I am trying,” she sings with exasperation on “Small Poppies” before unleashing some Velvets-inspired guitar madness. I don’t know that anyone has expressed uncertainty and self-doubt as well as Barnett has on Sometimes I Sit and Think while making it so entertaining at the same time. Sure to be one of the year’s best albums.