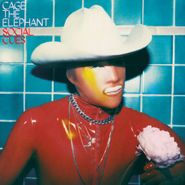 It’s been ten long tears since the release of Cage the Elephant’s breakthrough single “No Rest For The Wicked,” propelling the nascent transatlantic rock group from obscurity to the success they’ve enjoyed in the ensuing decade. Every bit of that time is felt on Social Cues, which trades in spikey New Wave signifiers and weary, cynical screeds. The pressure of the public eye dots Matt Shultz’s lyrics, especially on the album’s title track, and suggests a sense of resignation that pervades throughout, whether that be the narcotic balladry of “Goodbye” or the cathartic southern-glam of “Ready To Let Go.” The vibes may not be friendly, but that’s not to suggest Social Cues is a bummer. On the contrary, this is gothic-hued rock ‘n roll from a band that only knows how to express their inner tumult through sweet pop hooks. Let the bad times roll.