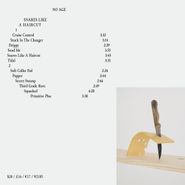 For a second, it felt like No Age represented a solid resurgence of noise rock in the American indie rock scene of the 2000s. But No Age lost their contract with Sub Pop and music trends changed. Rock seems to have become increasingly niche in the era of mega hip-hop stars selling out entire stadiums. It's moved to tighter knit communities, DIY venues, and a certain type of resistance to the mainstream. So it seems only right that No Age's fifth album (and their first in five years) found a home on Drag City, a creative haven for special musicians like Jim O'Rourke, Royal Trux, and Ty Segall. In what sounds like a reaction to modern music, No Age's Snares Like a Haircut has less to do with their punk roots and more like the closest to dream pop they've gotten. Though the duo still believes in blistering guitars and clean drum riffs, here everything feels more spacious and melancholy with inflections of strange guitar looping and unexpected weirdness throwing everything in new directions. "Soft Collar Fad" embodies this perfectly as the song has the rhythm and pace of punk, but it has some strange feedback, clangs, and repetitive guitar clicks that place them closer to art rockers. In just two-and-a-half-minutes, the track pounds on you with all these elements to make you remember what risks sounded like in indie rock. But "Send Me" is a better example of how the band has matured in the last five years. The song is pure sonic bliss and does some guitar experimentation that could've come right out of an Eno/Fripp album from the late '70s. These flourishes add so much complexity and depth to these perfect rock songs and elevates them over most sub par, amateur hour groups. It's a dreamy ballad, and even in all its lyrical and melodic sincerity, there's still an experimentation that works beautifully. Snares Like a Haircut might be their strongest effort to date and nothing today sounds quite as perfect as this.