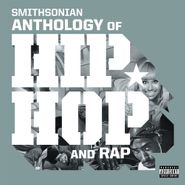 Smithsonian Folkways Recordings chronicles the rise of the hip-hop/rap scene, in their comprehensive new 129-track Smithsonian Anthology of Hip-Hop & Rap. Curated by artists Chuck D, MC Lyte, Questlove, and 9th Wonder with writers Jeff Chang and Mark Anthony Neal and early Def Jam execs Bill Adler and Bill Stephney, the Anthology covers the genre from its genesis to its current stadium-packing success. Chronicling the diversity of the genre is obviously an immense task and the Folkways crew has assembled some of the biggest highlights of hip-hop history from RUN-DMC to Roxanne Shanté and DMX to Drake. The collection includes a 300-page book featuring essays from some of the genre's leading lights, hundreds of photographs, and hip-hop-related items on display in the National Museum of African American History and Culture galleries, with original design by Def Jam Recordings's founding creative director, Cey Adams.