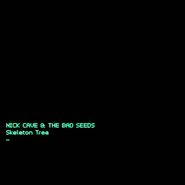 Nick Cave began work on his latest LP prior to the tragic death of his son Arthur; it was completed in the months following the loss. There's a weight to this somber, simple album and Cave's voice has never felt more urgent. A beautiful, bleak document of grief, love, and hope. - Alison, Hollywood

Skeleton Tree’s album opener “Jesus Alone” starts off Nick Cave’s latest LP with a heavy, oppressive, and haunted atmosphere. At times anguished, eerie and seeking, it’s some of Cave’s strongest work in years. For an artist with a carefully-curated public persona, whose lyrics often recount the tall tales of dark, dangerous, and larger-than-life figures, there’s a real openness and vulnerability to the new songs that makes them even more hard-hitting. (Longtime fans know the album was recorded in response to the tragic death of his son, Arthur.) It’s no surprise, then, that there’s a devastating quality to these songs, as well as a strange beauty springing from the love that makes the singer’s grief so palpable. These songs will follow you around long after the album has ended.